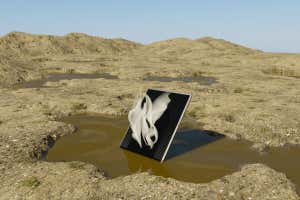 An artist’s impression of the water-purifying panel H.M. Cao at University of Rochester

The team from the University of Rochester, New York, was inspired by the capillary effect that is often observed in nature – in this way the plants extract moisture from the environment and distribute it on the stem against the forces of gravity, for example.

Using a laser, the scientists engraved a number of tube-like microscopic channels on the surface of an aluminum sheet and located a number of nanoscale irregularities. The resulting leaf is both black in appearance and attracts water.

“If you put a leaf vertically and put a drop of water on the bottom, the water will start flowing up against gravity,” Chunley Guo told New Scientist magazine.

According to them, their method is much more efficient than the existing mobile evaporation and purification systems – both as energy used and as types of pollutants that can be removed.

Purification of water by solar energy significantly reduces the level of pollution, because all impurities are released during evaporation.

The most common method of evaporating water is volumetric heating, in which a large volume of water is heated, but then only the top layer can evaporate. This is obviously inefficient, Guo says, because you use a lot of energy.

A more efficient approach uses heated panels of multilayer absorbent material that float on the surface of the water – because only a small part of the water is heated, they are better, but the available materials are quickly clogged with contaminants left after evaporation, which requires their frequent replacement.

“Our panel is much easier to clean,” Guo said. What is Aluminium Round Tube Profile

Any cookies that may not be particularly necessary for the website to function and is used specifically to collect user personal data via analytics, ads, other embedded contents are termed as non-necessary cookies. It is mandatory to procure user consent prior to running these cookies on your website.